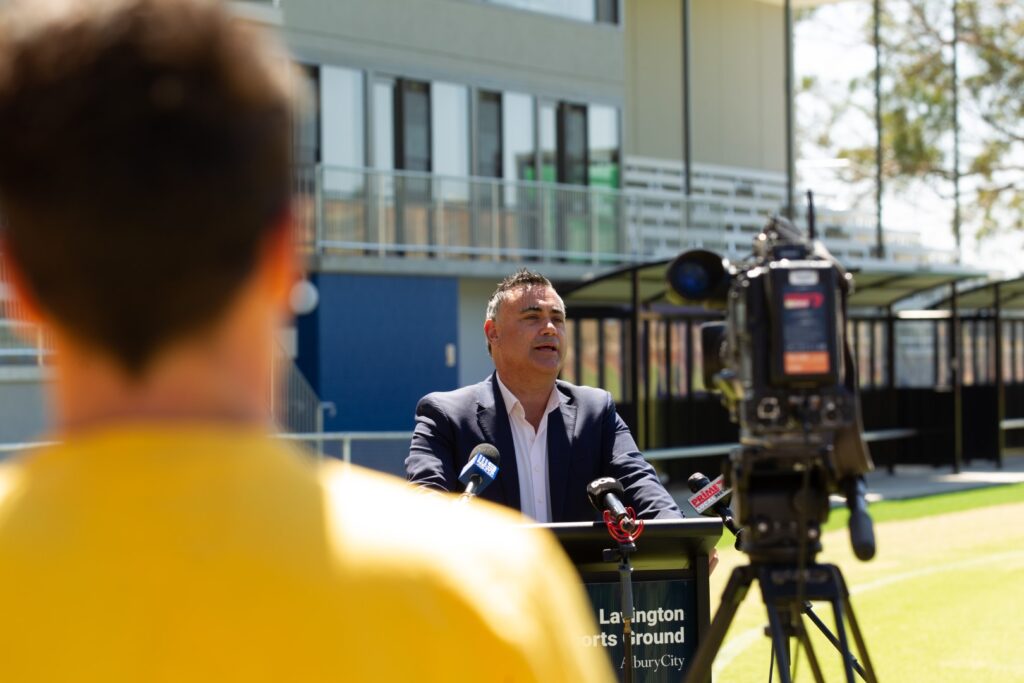 A NSW Government funded talent identification and youth development program over the next three years will help young girls who aspire to play for the Matildas.

This morning, Deputy Premier John Barilaro launched the program in Albury and explained how an investment of $750,000 will ensure players from Regional NSW have the opportunity to showcase their skills, leading up to the FIFA Women’s World Cup in 2023.

“Regional NSW is home to some of the most talented athletes in the country and has a rich history of producing Matildas with more than half of the National team coming from our State’s regions over the past forty years,” Mr Barilaro said.

“This investment from the NSW Government will ensure the next generation of girls and young women in regional NSW have the same level of access to coaching and support as their peers in the city as they strive to represent Australia on the world stage.”

It is designed for girls aged 12 to 18 years old, with funding to support the establishment of training hubs across the state and identifying talented young players will be further supported through the provision of training camps and player support scholarships – the added bonus is potentially being tutored by current and former Matildas.

“We are witnessing an exciting new era in Australian women’s football and this investment will create successful pathways for aspiring girls in Regional NSW who dream of wearing the green and gold,” Mr Lee said.

“With current and former Matildas stars including Ellie Carpenter, Sally Shipard and Amy Chapman all growing up in regional NSW, this program will establish a pathway for aspiring Matildas in their local communities.”

Football NSW Chief Executive, Stuart Hodge, was there for today’s launch, as was 110 cap Matilda, Joey Peters hailing from Leeton in the Riverina, as well as football representatives including young talented players from the Albury-Wodonga Football Association.

Hodge believes the NSW Government’s investment has created a once in a generation opportunity for upcoming female athletes.

“Hosting the FIFA Women’s World Cup 2023 will inspire the next generation of Matildas and with the support of the NSW Government, together with Football Australia and Northern NSW Football, we are committed to providing the best training and development opportunities for our female athletes across regional NSW,” Mr Hodge said.

“The support provided by the NSW Government is invaluable and will assist NNSWF to provide the most talented female footballers in our region with access to programs, services, coaching and competitive opportunities required to fulfil their potential and aspirations to represent their Country.”

Former Matilda and Westfield W-League player Ashleigh Sykes, with 19 caps for the national team, who together with her twin sister Nicole grew up in Dubbo, enthusiastically supported today’s announcement.

“Growing up in Western NSW, sometimes it was easy to feel forgotten and isolated, like you’re not being seen as often as some of the city kids,” she said.

“I was lucky enough to benefit from people sticking together and supporting each other, from small group sessions to dedicated and loving coaches, to men’s teams providing a competitive training environment.

“For us, when the opportunity came up, moving to a city like Sydney or Canberra was a big decision at the age of 16 years.

“We made the choice to stay at home to finish school but then had to do lots of travelling to development camps. What this new program is offering will provide young girls aspiring to play for the country with enhanced opportunities which I think is fantastic and I am excited to be involved.”