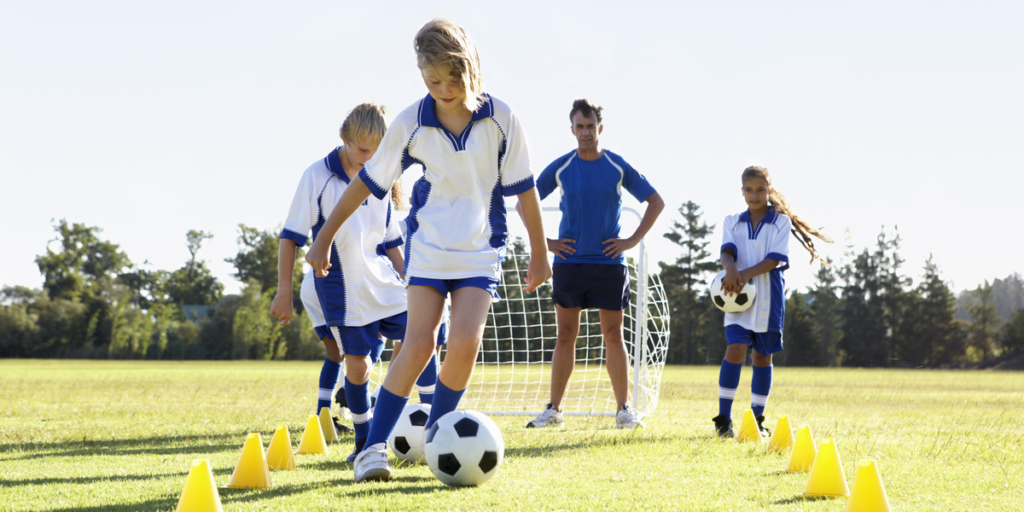 A national survey conducted by the Australian Sports Foundation has found that as many as 70,000 Australian grass roots sporting clubs require immediate financial assistance to survive, with up to 16,000 facing extinction in the short term future.

With over 14,000 registered football clubs currently participating in Australian competitions, the survey results suggest that many will be exposed to ruin in the coming months. Without injections of capital in the form of governmental support, thousands of grassroots clubs will be unable to meet their day to day expenses.

The report cites the need for a A$1.2 billion injection into clubs in order for them to continue, with a reported A$1.6 billion having already been lost since the pandemic began to seriously affect the Australian sporting way of life in March 2020.

Whilst much of the nation felt close to moving into a post-COVID existence in June, the recent outbreak in Victoria and consistent hot spots becoming apparent in New South Wales, both ensure that any notion of Australia being clear of danger is false.

The ramifications of Australia’s two most populated states still being gripped by the virus means that the challenges faced within grassroots football clubs will likely continue for some time, at least into the medium term future, thus increasing the financial strain and making the risk of collapse more likely.

The 2020 COVID-19 pandemic presented an opportunity for nations to deal with the danger and potentially emerge from it with a re-opened economy ready to repair the financial damage done. It was one grasped by New Zealand’s hands under the firm leadership of Jacinda Ardern. Now, after over 100 days of coronavirus clear living in the shaky isles, they too have fresh cases, just as the financial rebound was building considerable momentum.

Despite the latest developments in New Zealand, they have done a sterling job. However, even with the best efforts made across all states and territories, Australia has fallen well short of achieving a similar result to that of its trans-Tasman ally. The financial effects of the elongated struggle with COVID-19 are now beginning to threaten the very existence of sporting clubs that previously held our communities together.

As such, ASF predicts that around one quarter of Australia’s 70,000 grassroots clubs will most likely be unable to recover from the financial hit they have taken over the last six months. Should the situation in Victoria worsen or merely continue for some time, that number could well escalate.

When interviewed by The Guardian, ASF’s chief executive, Patrick Walker explained the dire financial realities facing grassroots sport and also spoke of the immense physical and psychological ramifications for the communities served by the threatened clubs.

“Our survey shows that without financial support, thousands of community clubs risk insolvency in the months ahead, which presents a real risk to the physical and mental health of our communities,” Walker warned.

The report identifies specific areas where clubs have been negatively impacted, with declining memberships and sponsorship commitments the most obvious concerns, as well as a significant lessening of opportunities to fund raise and generate revenue through hospitality.

Most graphically, the report cites the concerning reality that 93% of all clubs have taken a significant financial blow and also predicts that 70% of small local clubs would experience lower participation rates in the short term future. With concerns still prevalent in terms of safely participating in sport, parents and players themselves may well be cautious rather than confident when it comes to returning to the field of play.

That caution will only prolong the dangerous situation in which many grassroots clubs finds themselves. Despite players being back on football pitches in some states, the lost revenue from the postponement of play, as well as the impossibility of organising large community gatherings for fundraising purposes, means that many still lie directly behind the eight ball when it comes to surviving the horrors of 2020.

It is well known that grassroots football clubs run on the most shoe-string of budgets and the generosity of volunteers. As with many clubs across the country, and as pointed out in the ASF report, most have around six months of capital on which to draw should they hit hard times.

Sadly for many, that six months has now passed and many will be starting to fear for their survival; knowing full well that without immediate revenue streams, the continued existence of their club may well be a bridge too far. 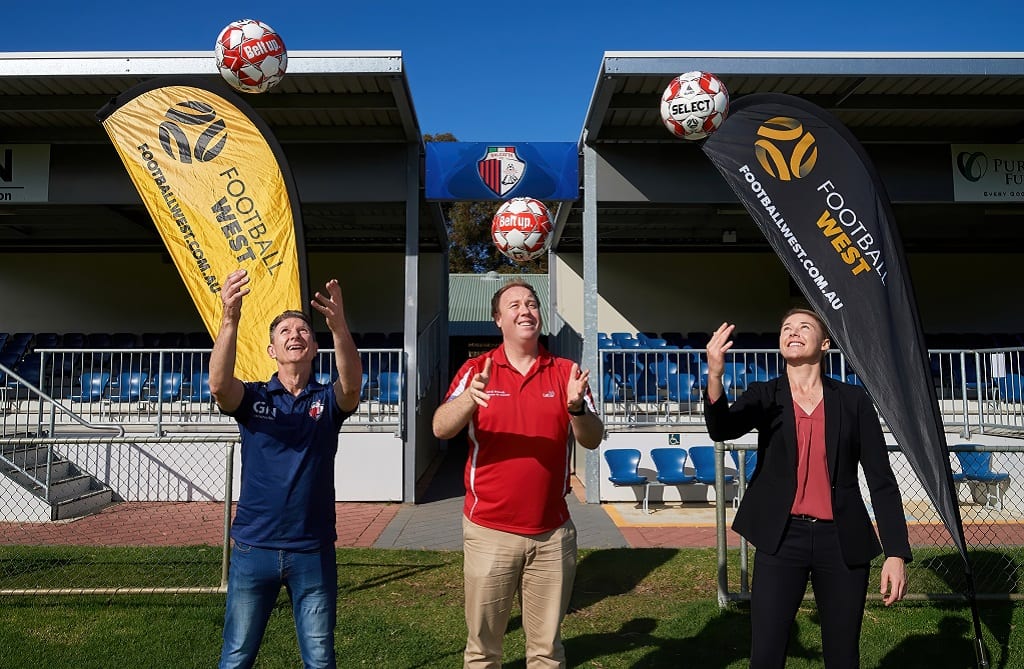 Football West has begun its distribution of Belt Up branded footballs to more than 100 participating metro-based clubs, plus clubs in regional Western Australia.

The ball distribution is a key component of Football West’s partnership with the Insurance Commission of Western Australia, which reinforces the message to motorists of the importance of wearing a seatbelt.

Each metro club involved in the initiative will receive 12 branded Mitre Impel footballs. In total, more than 2,000 balls will go to clubs and associations this year.

There are four pick-up points in Perth, and each club has been notified where to collect their footballs.

There will also be a ball distribution in the regions, which will be carried out by Football West’s Community Participation Officers.

The participating metro leagues involved in the current ball distribution are: 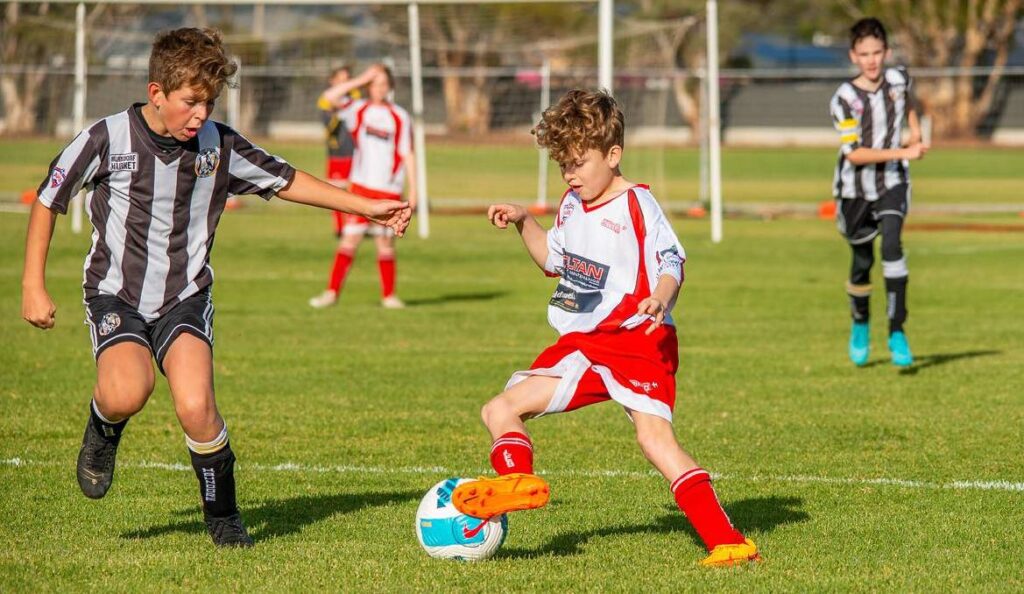 Whether it’s sports practice, music lessons or a casual catch up with friends, when children are involved in after-school activities, they’re more likely to feel happier and healthier than their counterparts who are glued to a screen.

In a new study conducted by the University of South Australia and the Department for Education, researchers found that children’s wellbeing is heightened when they participate in extra-curricular activities, yet lowered when they spent time on social media or playing video games.

Published in BMC Pediatrics, the study analysed data from 61,759 school students in years 4 to 9 (via the 2018 South Australian Wellbeing and Engagement Collection), assessing the average number of days per week children participated in after-school activities (3-6pm), and measure these against wellbeing factors – happiness, sadness, worry, engagement, perseverance, optimism, emotion regulation, and life satisfaction.

It found that most students watched TV about 4 days of the school week and spent time on social media about 3 days of the week.

According to the Australian Institute of Health and Welfare, one in seven children (equivalent to about 560,000 children) have a mental health disorder, with one in 10 children having concerning levels of wellbeing.

“This is especially important for primary school-aged children as they’re learning about the challenges and risks that full-time school can present; but it’s equally important for teenagers who are facing a range of physical, social and emotional changes.

“Our study highlights how some out-of-school activities can boost children’s wellbeing, while others – particularly screens – can chip away at their mental and physical health.

“Screens are a massive distraction for children of all ages. Most parents will attest to this. And whether children are gaming, watching TV or on social media, there’s something about all screens that’s damaging to their wellbeing.

“It’s interesting because you might think that it’s the lack of physical movement that’s causing this, yet our research shows that doing homework or reading – both sedentary activities – positively contribute to wellbeing, so it’s something else.

“In fact, we found that children’s wellbeing was higher when they participated in extra-curricular activities – even if they already reported being happy.

“What this shows is that we need to find ways to encourage children of all ages and backgrounds to get involved in activities that keep them away from TV, computers and mobile devices.”

The research also highlights distinct differences between children who came from low and high socio-economic backgrounds.

Conversely, children who played video games and used social media almost always had lower levels of wellbeing: up to 9 per cent less likely to be happy, up to 8 per cent to be less optimism and 11 per cent to be more likely to give up on things.

“Children who were more at risk tended to come from lower socio-economic backgrounds, which indicates a clear need for greater support in these areas,” Dr Virgara said via University of SA.

“As many of these children responded well to playing sports, education initiatives and continued funding of government programmes such as the State Government’s $100 School Sports Vouchers could be good options.

“All in all, the message is clear – gaming, watching TV, playing on computers, and scrolling through social media are not helping build or sustain positive wellbeing in children.

“It’s certainly a challenge, especially as most children have been brought up on devices. But if families can be more aware of the issues associated with screens, then perhaps we can find a better balance of screen time and other out-of-school activities.”