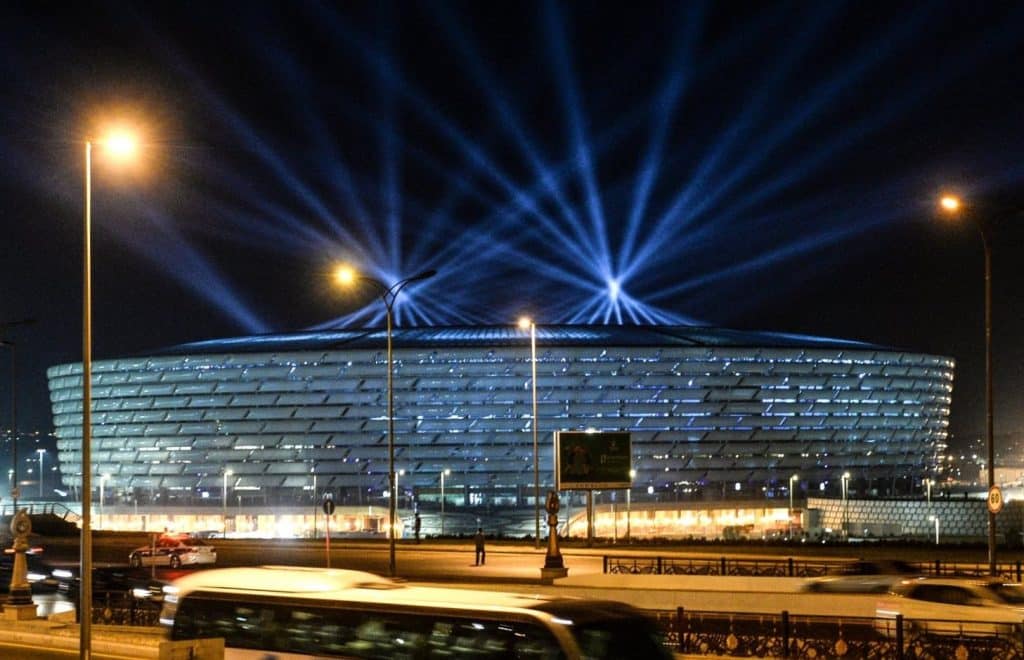 In the past, UEFA has had a solid track record at holding major finals in different stadiums across Europe.

Not only is the venue a neutral one at that, not handing any advantages to either side. But it gives great publicity to some cities that don’t usually get to see football of that calibre.

Cardiff and Lisbon spring to mind as two of the most recent cities that fit this bill.

Baku, the capital of Azerbaijan seems to also be in that boat. But when you look a bit closer, it isn’t as it appears.

It will host the 2018/19 Europa League final between English superpowers, Arsenal and Chelsea. Both sides are strongly supported across the globe, meaning that tickets to the game will be hotly contested, right?

Arsenal and Chelsea have only been allocated 6000 seats each in the Baku Olympic stadium, which has a capacity for nearly 70000 people. Seems ridiculous right?

That’s just the tip of the iceberg.

The rest of the seats will be given to corporate members and UEFA partners. You can make up your own minds as to why that’s the case.

It’s a blight on UEFA for not only choosing to do this, but to do it at the expense of those who make the game so unanimously loved across the globe.

Furthermore, flights to Azerbaijan for anyone wanting to go to the game and cheer their team are stupidly expensive.

Some flights are in excess of 1,000 British Pounds (that’s 2,000 AUD) and require multiple stopovers. If you think back to last September when West Coast fans were ripped off by the airlines on their way to Melbourne for the AFL Grand Final, it’s like that.

But on some serious steroids.

“Win 3 flight and accommodation packages for the UEL Final in Baku” would mean more to supporters.

And as if it couldn’t get any worse, it has.

With Arsenal making the final, Armenian playmaker Henrikh Mkhitaryan would be in contention to either start or come on as a substitute. He’s been a serviceable player this season for the Gunners and would offer them great flexibility on the day, either on a wing or as a central midfielder.

But due to political tensions between Armenia and Azerbaijan, it’s a 50/50 chance that Mkhitaryan makes it to Baku.

Now whilst it’s easy to say UEFA couldn’t have done anything about this, truth be told, they could’ve prevented this.

Simply don’t hold the final in a country where there are political tensions of any sort. As Thanos once said, “it’s a simply calculus”.

Stories from fans about Baku so disheartening. Armenian Arsenal fans can’t go, fans who haven’t missed a final in 30 years can’t go because flights cost more than a season ticket. Those who can afford it, staying at home because their mates can’t go.

In a day and age where society thrives on inclusion for all people regardless of race, gender or anything else, it’s a damn shame that UEFA and the sport of soccer have come to this.

For everything they’ve stood to stamp out, this farcical situation which is overshadowing what should be a great final seems to be a step in the wrong direction.

It’s not as big of a mistake as the decision to host the 1985 Champions League final in Belgium’s Heysel Stadium, but it’s certainly a mistake that most football fans and UEFA will want to forget in a hurry.

Let’s hope that lessons can be learnt from this. 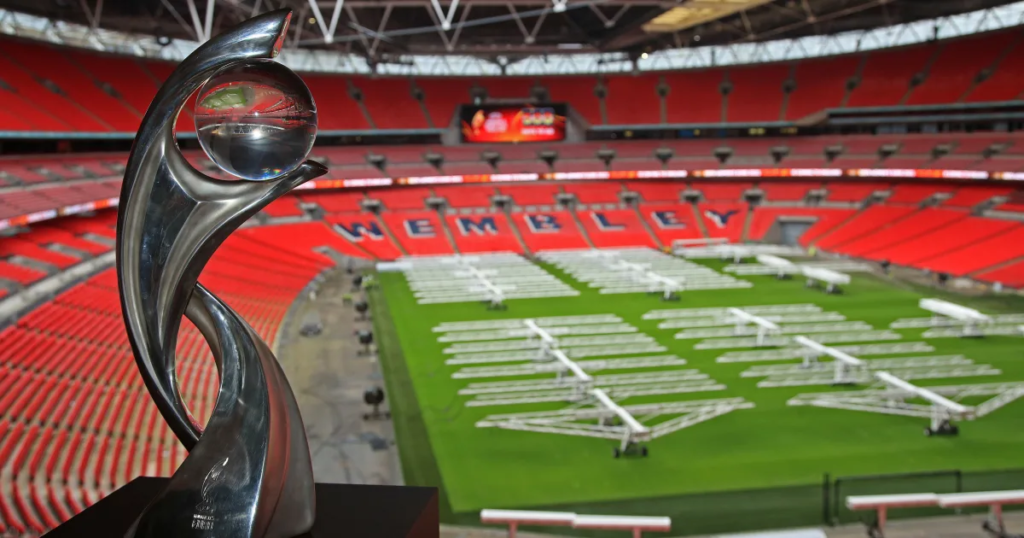 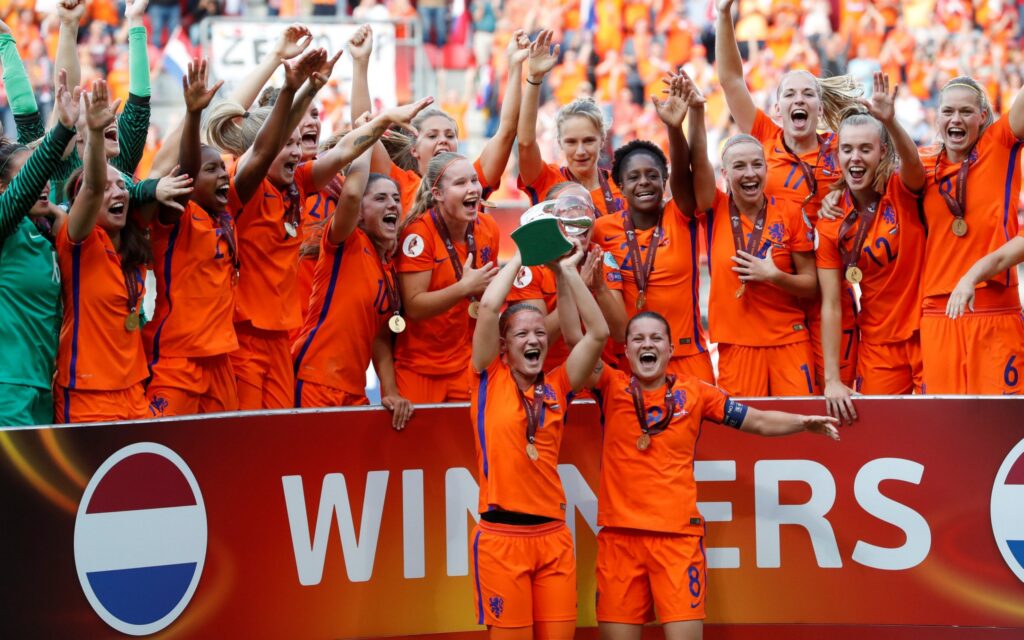 Social media platform TikTok has been announced as an official partner of UEFA Women’s EURO 2022.

This year’s tournament will see TikTok utilised to amplify women’s football and to showcase some of the world’s best talents to the global football fanbase.

TikTok’s European General Manager, Rich Waterworth, had the following to say about the announcement:

“The move builds on the success of our partnership with UEFA for EURO 2020 and the incredible growth of women’s sport on TikTok,” he said.

“Alongside our landmark Title Sponsorship of the Women’s Six Nations rugby competition and unique partnership with Burnley FC Women who stream all their home games live on TikTok, we’ve seen everything from England’s Lionesses taking us behind-the-scenes, to Spain’s women’s Primera División sponsor Iberdrola showcasing the pride and passion of women’s football through #JueganComoChicas (#PlayLikeGirls), and football freestylers like Lia Lewis inspiring young women to get into the beautiful game.

“All this has led TikTok to become a cultural home for all sports fandom across Europe, with the hashtag #womeninsports racking up almost a billion views.

“With the tournament kicking off on 6 July across England, our community can get involved in a variety of creative ways, from using our innovative special effects and sounds in their videos, to joining in with TikTok LIVEs and EUROs-inspired hashtag challenges. Look out for an official UEFA Women’s EURO 2022 TikTok account ahead of the tournament, which aims to inspire and entertain the global football community with exclusive behind-the-scenes content, plus current and archival footage.”

Guy-Laurent Epstein, marketing director of UEFA, added to the statement:

“We are thrilled to once again partner with TikTok, this time for the biggest UEFA Women’s EURO ever,” he said.

“With the TikTok football community ever-growing with teams, fans, creators and associations, we are looking forward to showcasing this summer’s premiere sporting event featuring some of the greatest women’s footballers in the world through unique, creative and engaging content. It’s an exciting time to be a football fan.

“Since our partnership with UEFA for EURO 2020, we have seen TikTok become the home of football fandom; with creators, players and nations alike coming together to share their passion for the beautiful game, in a uniquely TikTok way. We are delighted to continue this partnership as the Official Entertainment Platform of UEFA Women’s EURO 2022, and to build on our joint efforts to promote equality and inclusion in football through TikTok’s #SwipeOutHate campaign and UEFA’s #EqualGame.

“We cannot wait to see our community show their support for the women’s game, as we make this year’s championship even more accessible to our global community.”